Once upon a time in 1993, a passionate group of local volunteers felt called to take on the important task of helping their neighbors. That group eventually became the Dorchester Habitat for Humanity, and their mission still rings true in 2018 –“Putting God’s Love Into Action by Bringing People Together Building Homes and Hope.”

While the group has always shared large aspirations, the organization started out with modest resources; the first Habitat ReStore was in a small building on Trolley Road, according to Caroline Miler, Development Director for Dorchester Habitat. Later, land was purchased off Highway 78/Jedburg Road for the current 20,000 square foot warehouse.

“There were no paid staff members at the time Dorchester Habitat for Humanity started,” Miler pointed out. “We are blessed to have grown significantly over the past 25 years. To date, DHH has 15 paid employees. This is solely due to the great work of the volunteers, the donations and shoppers at the ReStore, and the partnerships on each build.”

There is much to celebrate in 2018 for the organization’s 25 years of service, and Miler pointed out the various ways that locals and donors can get involved and have fun. The Lowcountry Boil will be held the end of April, complete with food, entertainment and a live auction. This October, the 25th Anniversary Gala will be a night to remember with live music, heavy hors d’oeuvres, silent and live auction, and a full open bar. Throughout the year DHH will host various luncheons and socials to show donor and volunteer appreciation. “Volunteers really are the lifeblood of this organization,” Miler states, “we truly could not carry out our mission without them.”

But there’s more to do besides eat, drink and make merry – after all, Dorchester Habitat has built and sold 60 homes in the county since its inception in 1993, according to Miler. Thus, the opportunity to do this good work – and create four homes per year – is an important way that the community can get involved and celebrate the milestone. Everything from volunteering at the ReStore and build site, or donating building and household materials, to hosting your own fundraiser benefiting the organization, there are endless opportunities for everyone to get involved, and lots without even lifting a hammer!

“Advocacy is something we really push for in our community too – getting folks to spread the word about our mission and purpose,” Miler added.

So what’s in store for this heartfelt organization the next 25 years and beyond? More houses, for one thing – the staff and volunteers would like to build a total of six homes per year instead of four. Of course, that means getting more neighbors of Dorchester County to donate and volunteer. Another longer term goal is to open a second ReStore.

“Our ReStore has been so successful, and most people aren’t aware that it’s Habitat’s largest fundraiser,” she commented.

Want to get involved and celebrate this important community milestone? Go to DorchesterHabitat.org or call (843) 851-1414 for more information. 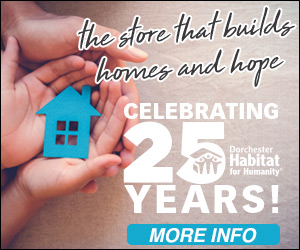